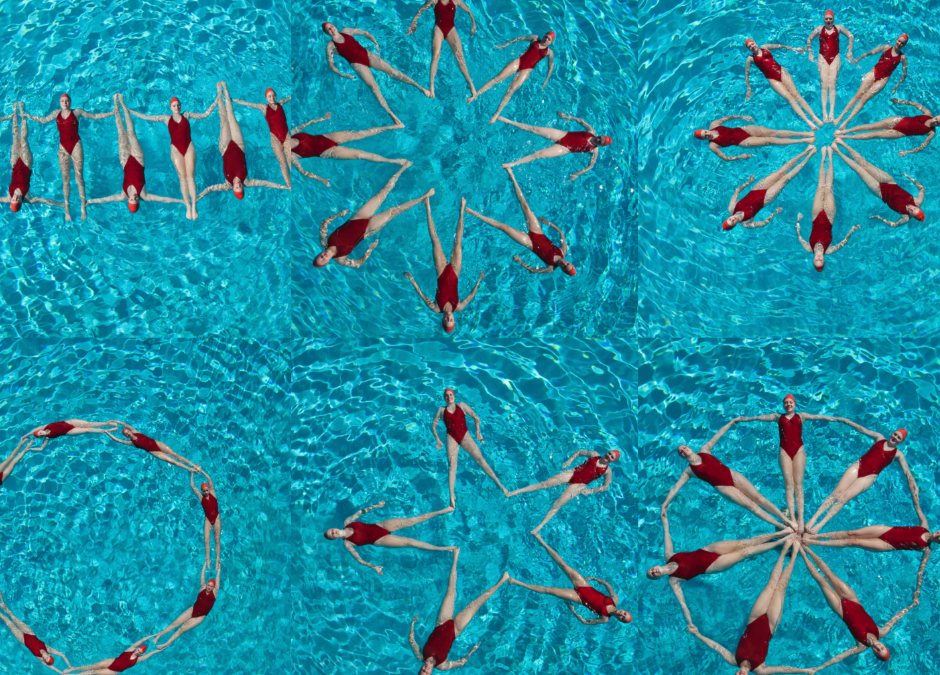 You’ve probably heard of synchronised swimming, but chances are you haven’t heard the incredible story of the first ‘water ballet’ club and how it became an Olympic discipline. Let’s shine a spotlight on this underrated sport and discover more!

Originally known as ‘water ballet’, synchronised swimming started in the 20th century. Early records suggest that the first water ballet clubs were founded around 1891, with Berlin being the first city to host competitions. However, it was a very niche sport. Annette Kellerman, an Australian swimmer, performed water acrobatics in a US tour in 1907 and was one of the first people to surprise and inspire the world with what was known as ‘ornamental swimming’.

Although Annette Kellerman can be credited as a founder of the sport, the biggest contributor and craftsman of the sport as we know it today was Katherine ‘Kay’ Curtis. Curtis took the technique of artistic swimming to another level (and to the Olympics!) by combining water acrobatics, diving and stunts with music. 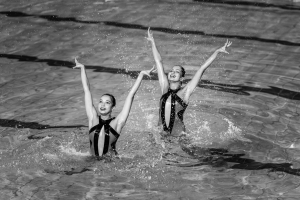 Curtis, born in Wisconsin in 1897, was an outstanding high school athlete. She swam across Wisconsin’s vast Lake Mendota in 3h 40 min, beating three male swimmers who dropped out halfway due to immense headwinds. She became a swimming instructor, working in various schools around the USA. While at the University of Chicago, she began teaching swimmers to perform interesting tricks, strokes and floating formations. One team of swimmers, the Kay Curtis Modern Mermaids composed of 30 girls, performed at the World Fair in Chicago in 1933-34, and were presented by none other than Olympic swimming gold medallist, Norman Ross. Curtis published the foundational textbook on her art form, called Rhythmic Swimming, in 1936. 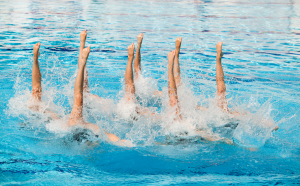 However, just as the popularity of synchronised swimming was growing, World War 2 hit. Curtis joined the Red Cross and, in 1943, she was shipped to North Africa. Still, her passion for rhythmic swimming continued in her work as a military recreation official, first in Morocco and then in Italy. For three years, Curtis toured Italy with this job and, in June 1945, she staged an “Aquacade” production for the Armed Forces in the spectacular fountains and pools of The Royal Palace of Caserta, which was being used as Allied headquarters.

When she finally returned home to the USA in 1962, after travelling and teaching all over Europe, Curtis saw her art form become a full-blown sport. Even though she originally envisioned it as a co-ed sport, it became predominantly practised by women. It was accorded international recognition with its inclusion in the Olympics in 1984. The two disciplines – duet and team – have been there since Sydney 2000. Since then, the tremendous athleticism and grace of the competitors have wowed observers and raised the sport’s profile and stature globally. 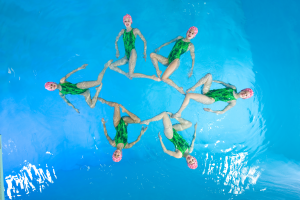 Watching synchronised swimming, you might think it looks seamless and easy. However, what’s easy on the eyes is not easy at all. During performances, artistic swimmers endure gasps for air and burning muscles without showing it on their faces (in training, you can wear goggles but not in competition). It takes years of gruelling training and dodging kicks to the head, disc herniations, muscle and tendons tears to make a beautiful performance look easy. You need serious breath control, endurance, power, agility and mental concentration to excel in this sport!

If you’re tempted to give it a go, why not find your nearest academy and enquire about classes?