Legends of the Deep: Watery Mysteries From Around The World

Why are we drawn to the water?

Most swimmers agree that there’s something magical, healing and unpredictable about it which keeps us diving back in!

70% of the Earth surface is underwater and yet 95% remains unexplored by humans… the mystery of what lies beneath has captured our imaginations for millennia.

Here are some of our favourite watery folktales from around the world to inspire, spook and entertain you!

Creatures of the deep

Kraken, Makara, Nessie, Yacumama, Umibozu… almost every culture in the world has a name for the sea monsters believed to inhabit the depths of our planet. Sailors have blamed them for attacks on ships and the vanishing of islands. Mermaids (half-human, half-fish) also come up in folklore
worldwide.

One of our favourite myths about this is from Sicily: Nicola was the son of a fisherman with a knack for diving who everyone called “Colapesce” (“Nick the Fish”) for his extraordinary ability to hold his breath underwater. The king of Sicily asked Colapesce to dive as deep as he could to find

out what holds the island of Sicily up. Colapesce went to explore and, upon his return, informed the king that Sicily was held up by three columns, but that one was damaged, and it looked like the island would soon be submerged.

Legend has it that Colapesce then returned to live underwater as a fish, helping to hold up the third column with all his strength… and when he moves to adjust himself, Sicilians feel the earth move under their feet! 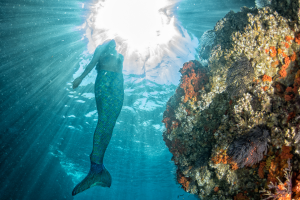 What do Lake Windemere and Lough Gur have in common? They’re not just lakes in the British Isles… they’re also the sites of strange visions! Several people have spotted the ghostly white horse that traverses Lake Windemere to warn of a storm, or have stared into the depths of Lough Gur to see the living souls that inhabit a parallel world at the bottom of it. In the USA, the waters of Lower Yellowstone Falls in Wyoming are said to run red on occasion after a group of Native Americans were swept over and drowned in 1870… or is it a trick of the light?

If you don’t catch a glimpse of the mystical phenomena in lakes or waterfalls, then maybe you’ll spot one of the many ghost ships out on the ocean. The Caleuche sails around Chile’s Chiloé Island at night, said to be a beautiful white ship, always full of lights and the sounds of a party on board, but which disappears as quickly as it appears, leaving no trace.

The Lady Lovibond, wrecked off the coast of England in 1748, is said to reappear there every fifty years: legend has it that the ship’s captain was sailing to Portugal to take his new bride on honeymoon, but that the first mate (a jealous love rival for the captain’s young wife) seized the wheel in a rage and steered the ship onto the treacherous Goodwin Sands, killing all those on board… You might need to swap your goggles
for binoculars to see this! 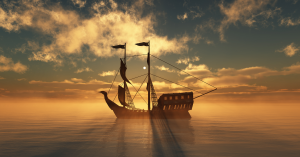 If you’re feeling brave, why not actually swim in an enchanted body of water? On the Philippine island of Mindanao, tourists can bathe in the translucent jade waters of the Hinatuan Enchanted River, which is protected by engkantos (supernatural beings). Fishermen have long been puzzled by its magical waters, in which they swear to have seen various fish but couldn’t catch any no matter how they tried.

Now if you’re feeling really brave, why not go for a swim in a haunted pool? According to legend, Devil’s Pool in Australia is inhabited by the spirit of an Aboriginal woman, Oolana, who had a love affair with Dyga, a handsome warrior from another tribe. They eloped, but the elders found them and dragged Dyga away, leaving Oolana to drown herself in the pool in despair. Locals believe that her spirit is still searching for her love today and that she pulls young men into the pool to their untimely deaths. Seventeen young men have died there in the last 50 years… If you do go in for a swim, make sure to keep to the designated safe zones!

There’s a similar spooky legend from Hong Kong, where several people report seeing a woman dressed in a red cheongsam (traditional wedding dress) by a natural pool called The Bride’s Pool… so-named because a bride fell into the water and drowned on the way to her wedding! And of course, no discussion of haunted water would be complete without mentioning the Bermuda Triangle, a 500,000 square-mile patch of sea between Bermuda, Miami, and Puerto Rico where innumerable ships have disappeared forever in perfect conditions… Maybe best to avoid going for a dip here on your next Caribbean holiday! 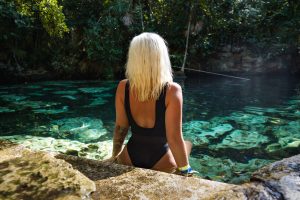 These watery legends are not just baseless old stories: new ones come up all the time! In 2011, ocean explorers found an oval-shaped object with strange markings on the bottom of the Baltic Sea. An artistic impression of the grainy sonar image quickly went viral on the Internet, with many people saying it looked like an alien spaceship on the sea floor… Scientists think this “Baltic Sea anomaly” is actually some kind of glacial deposit, but its origins are still uncertain. Maybe the story of this aqua-UFO will stick around for generations!

Have you got any watery folktales to share? Any personal encounters with sea gods? Found any sunken treasure?