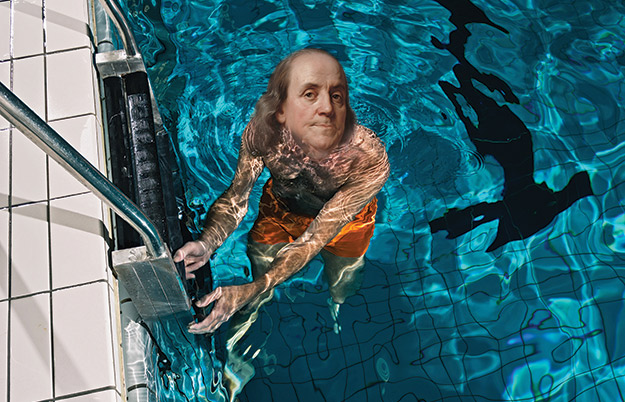 The genius of one of America’s Founding Fathers – Benjamin Franklin – is widely known, but there’s another side to this polymath that only a few know about. Franklin was an avid swimmer and fitness fanatic who invented swim flippers and very nearly opened his own swim school!

As a child, Benjamin Franklin adored swimming in the Schuylkill River in colonial Philadelphia. He taught himself how to swim when he was 8, and also taught some of his friends. Even though he grew up in a poor family who could only afford to formally educate him up to the age of 10, that didn’t stop him reading and re-reading one of his favourite books, The Art of Swimming by Melchisédec Thévenot. This book was a bestseller at the time and made the breaststroke popular. In his autobiography, Franklin said that he “studied and practised all the motions and positions [in the book], and added some of my own, aiming at the graceful and easy as well as the useful [swimming motions]”. Was Franklin the first synchronized swimmer?! 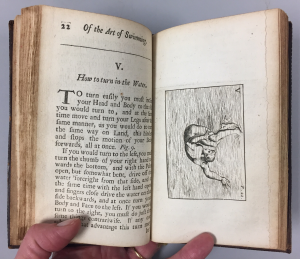 Young Benjamin Franklin also had an appetite for problem-solving: when he was only 11, he invented a pair of swim fins for his hands to swim faster in the water! Even though this invention had some problems with it (and even though he went on to invent much better things such as the lightning rod, the rocking chair and bifocal glasses – to name a few!), Franklin proudly described his first invention in a letter dated March 1773 as follows:

“When a youth, I made two oval pallets, each about ten inches long, and six broad, with a hole for the thumb, in order to retain it fast in the palm of my hand. They much resembled a painter’s pallets. In swimming, I pushed the edges of these forward, and I struck the water with their flat surfaces as I drew them back. I remember I swam faster by means of these pallets, but they fatigued my wrists. I also fitted to the soles of my feet a kind of sandals, but I was not satisfied with them, because I observed that the stroke is partly given by the inside of the feet and the ankles, and not entirely with the soles of the feet”. 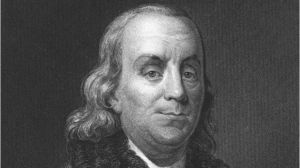 One day, while out on a boating trip with friends, Franklin jumped into the Thames and swam from Chelsea to Blackfriars (for those not familiar with London, that’s around 3.5 miles!), performing all sorts of water tricks along the way or, as he described it, “many feats of activity, both upon and under the water”. His feats wowed many observers, especially since swimming in those days wasn’t seen as a sport – more as something done by sailors thrown overboard and skinny-dipping kids. 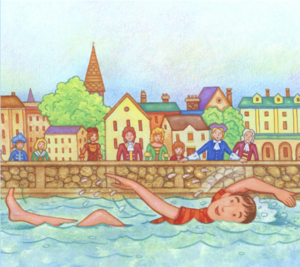 One of his fans was a politician called Sir William Wyndham, who asked Franklin if he could give swimming lessons to his two sons. Franklin had already taught two of his co-workers from his printing shop how to swim, and Sir Wyndham offered to pay him handsomely for lessons for his sons. Sir Wyndham even offered to help Franklin open the first swim school in England, however, Franklin refused the offers because he was beginning to feel homesick for Philadelphia. After 18 months in London, he headed back to America. Franklin later regretted this decision slightly as opening a swim school could have helped him get out of debt, writing in his memoirs that:

“If I were to remain in England and open a swimming school, I might get a good deal of money; and it struck me so strongly that had the overture been made me sooner, probably I should not so soon have gone to America”. 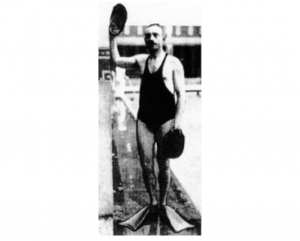 Had Franklin had taken up Wyndham’s offer, there is no doubt that he would have made one of the finest swimming coaches of all time with his excellent swimming and leadership abilities! However, it’s probably a good thing he went back to America since he later helped pen the US Declaration of Independence and Constitution… Today, his contribution to the sport of swimming is remembered with his honorary induction into the International Swimming Hall of Fame in 1968.

Have you got an inspirational swim coach?